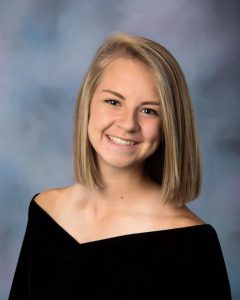 While at Elkins High School, Leary served as Student Council Secretary and Vice President of the National Honor Society. She was a member of class council and was the recipient of Elkins High Purpose Award and Elkins High Perspective Award. She was a 4-year starter/letter winner for the EHS softball team and was a 4-yr honoree to the Big 10 All-Conference Team. During her senior year, she was a Homecoming Maid of Honor. As a student at EHS, she served on the following Mountain State Forest Festival committees: Kids Day at the Park, Children’s Parade and Children’s Fest.

Maid of Honor Leary was employed as a private babysitter, as Nursery Staff at Davis Memorial Presbyterian Church and as a summer camp counselor at the Elkins City Park. She is a member of Saint Brendan’s Catholic Church in Elkins. In her free time, Leary enjoys outdoor activities such as camping and hiking. 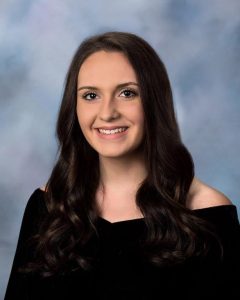 Maid of Honor Mullenax is the daughter of Christina Mullenax of Elkins. She is the granddaughter of Sharon and Lloyd Teter and Roger and Jonnie Mullenax, all of Elkins and the Late Dale and Sonja Pennington.

Mullenax is a 2016 graduate of Elkins High School and is currently a sophomore at Fairmont State University, pursuing a degree in Elementary Education. She attends First United Methodist Church in Elkins and Horizons church in Lost Creek, WV.

While at Elkins High School, Mullenax was a member of the National Honor Society and a princess for the Senior Homecoming Court. Mullenax was a 4-year soccer player and played three years for the tennis team, lettering in both sports.

In 2008, Mullenax was a flower girl in the 72nd Mountain State Forest Festival and her mother, Christina, has volunteered for different events for over 16 years and served as an Assistant Director for four years.

Maid of Honor Mullenax was employed with the Randolph County YMCA for over three years and babysits for children in the Elkins area. She enjoys playing tennis, hiking with friends, cooking, and baking with her grandmother. Sydney loves spending time with her family and friends and loves to be at the beach whenever possible.

Leary and Mullenax will accompany Queen Silvia LXXXI during her Royal Coronation at 2 p.m. Oct. 6 at the Outdoor Amphitheatre of Davis & Elkins College.

The 81st edition of the Mountain State Forest Festival with the theme “FALL into Autumn Traditions” will take place September 30 to October 8. For more information call 304-636-1824.