The Mountain State Forest Festival originated in 1930 and immediately attracted national attention. Dedicated to the preservation and conservation of the state’s natural resources it annually attracts around 125,000 visitors depending upon the weather. Visitors may reach 200,000 or more whenever there is a Presidential visit to the mountain town of Elkins.

It was stated at this meeting that the town of Oakland, Maryland had been most successful in staging an annual homecoming. It was decided to appoint a committee to go to Oakland and consult with the officials of the homecoming for the purpose of securing important information, which would be helpful in planning and staging the Elkins Homecoming.

The towns of Winchester, Virginia and Martinsburg, West Virginia are just twenty-two miles apart and are both located in the heart of the great apple-growing belt of the Shenandoah Valley. These two towns have always been commercial rivals. 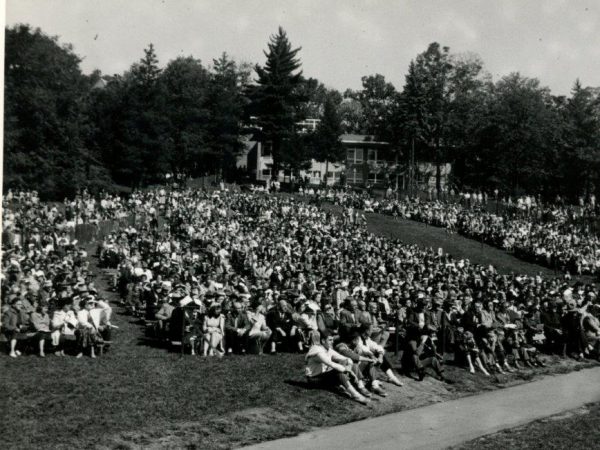 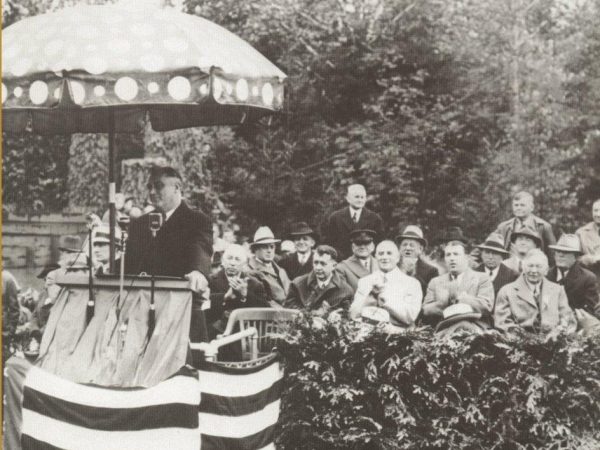 Winchester had been staging the Apple Blossom Festival for many years and had been receiving much national publicity. The State of West Virginia had also been giving financial aid to the Apple Blossom Festival for many years. Because of these factors, it was said that Martinsburg was somewhat envious of its neighbor. It had been reported for a period of time that Martinsburg was planning a festival of it’s own to be known as the “Fall Apple Harvest Festival.”

The arrival in Winchester of the Elkins Homecoming Committee was good news to the officials of the Apple Blossom Festival. After some discussion between the Elkins and Winchester groups; the Winchester group suggested that the plans for the Elkins Homecoming event be dropped and in the place of such plans, that plans be made for and annual festival. The Elkins group was much surprised by this suggestion and so replied that Elkins had nothing to stage a festival around like “Apples”. To this remark, the Winchester group said they were very familiar with the beautiful mountain scenery around Elkins. After more discussion, the Winchester group, again suggested that Elkins stage a “Forest Festival” and that the festival be held in the fall of the year at a time when the leaves would be at a peak in countless different colors. Before the Elkins group left for home, the Winchester group informed them that after arriving home and if it was decided to stage a festival the Apple Blossom officials would be glad to send a committee to Elkins to assist with the plans for the festival.

Mr. George Dornblazer, Superintendent of the Rains Lumber Sales, had the year prior directed in Elkins a ceremony for the Osiris Shrine Temple of Northern West Virginia. Because of his success in directing this ceremony, he was asked to direct this festival. So, Mr. Dornblazer was appointed Director General of the first “Mountain State Forest Festival”. Mr. Dornblazer was given full authority to plan and stage the festival, as he desired.

Mr. Dornblazer appointed Mr. J.O. Hunnicut, Secretary of the Elkins YMCA as Assistant Director. Mr. L.L. Cook, manager of the Elkins Credit Bureau, was appointed secretary-Treasurer. Mrs. Don Harper, wife of an Elkins oil distributor was named Secretary to Mr. Dornblazer and office manager. Festival offices were opened at the Wilt Building. Miss Virginia Patterson (Mrs. C.R. McKim). Secretary to Mr. Cook in his business and Mrs. Charles Kerner, Secretary to Mr. Dornblazer in his lumber business offered their assistance in answering correspondence and keeping records. The Director General and his staff had been appointed and headquarters were established. November 1930 dates for the festival were selected and plans were being completed for the first Mountain State Forest Festival. 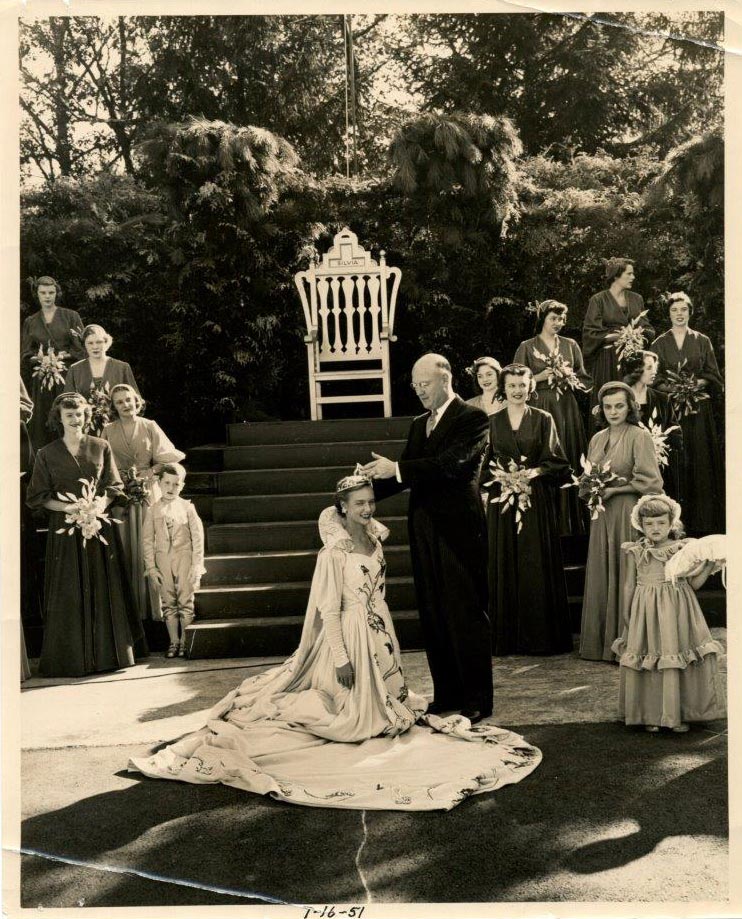 Mr. Dornblazer appointed a representative to contact Dr. James E. Allen, President of Davis and Elkins College, as to the cooperation of the college. The festival officials desired the use parts of the college campus for festival activities as well as a site for the queens coronations ceremonies; also, to use sections of Halliehurst hall for the headquarters of the queen and court for a reception. At first, Dr. Allen hesitated to offer his cooperation saying, “A festival will be to big for Elkins, you should start a county fair”. Later Dr. Allen gave up the idea of a county fair and he and Mrs. Allen devoted much of their time and talents to the success of the festival.

Not only was the Elkins community beginning to show much enthusiasm for the festival, but the State of West Virginia from Governor William G. Conley down through every department. The Commissioner of Agriculture at that time had charged of advertising funds. The Commissioner at that time was Mr. J.B. McLaughlin and his assistant was Mr. Guy Robinson. The both came to Elkins many times prior to the festival and assisted with the staging of the festival. The festival received much financial assistance through the offices of Mr. McLaughlin.

Mr. William Cool was State Superintendent of Schools and as such he was in charge of all state colleges and public schools. Mr. Cook was able to offer financial assistance to the festival through his department.

Many times, Mr. Dornblazer mentioned the need for an Elkins band. Elkins had the Elkins high School Band and the I.O.O.F Home Band; but Mr. Dornblazer wanted an Elkins City Band to lead the Grand Feature parade. Mr. Walter Fitzwater, manager of Valley Supply Company and his brother, Mr. J.H. (Mike) Fitzwater were both excellent musicians. Mr. Dornblazer asked Mr. Walter Fitzwater if he could arrange a bank from local and nearby musicians. Some days later, Mr. Fitzwater reported that he and his brother could secure enough good band musicians to have a good band. He also mentioned that the Baltimore and Ohio railroad at Grafton would furnish uniforms for the band. The band got together on the morning of the Grand Feature parade for their only rehearsal. They made a grand showing leading the parade.

The festival committee planned two featured dances. One dance was to be known as the Princess Dance and the other to be known as the “Queen’s Ball”. The festival committee then thought another type dance should be offered, and Mr. Meritt Wilson Jr. was asked to plan a cabaret type of entertainment for the Saturday of the festival. The Bishop Building at the corner of railroad Avenue and Fifth Street was secured for the cabaret, which proved very popular.

Before the festival was planned, Mr. Dornblazer asked Mr. Harris Jones, Manager of the Elkins U.S. Weather Bureau to check the records of the local weather station form the time that records were kept and inform his as to the days of the month of October with the best average weather. Mr. Jones after checking his records reported the first seven days of October over the years had the best average weather for staging such an event as a festival. The festival committee then declared that in the future the festival should be held on the first Thursday, Friday, and Saturday in the month of October. This was done to advertise the dates of future festivals a year in advance so other county fairs and festivals could select dates for their gatherings that would not conflict with the dates of the Mountain State Forest Festival.

After weeks of working day and night, Mr. Dornblazer and the countless faithful workers were ready for the first annual festival. In spite of near zero weather, the festival was acclaimed by thousand as a great success.

The Elkins Business Men’s Association voted to continue the festival as an annual affair. A vote of appreciation was extended to Mr. Dornblazer and his workers. Mr. Dornblazer was asked to serve as Director General for the second annual festival, but because of his many other interests he felt he should decline the honor.

Incorporated in 1935 it’s most unique characteristic is that the events are staged by all volunteers with the exception of the Executive Director and Administrator (Administrator became full time in 2000) who are both paid staff. The hundreds of volunteers donate thousands of hours each year to make the festival a success.

There are no specific festival grounds, with activities held throughout the city. Some events are free, with a nominal fee charged for dances, Distinguished Guest Dinner, Country Music Show and the Gospel Show.

The Mountain State Forest Festival has become an annual event, since it started in 1930 with the exception of seven years, 1942 thru 1948, during World War II. However the tradition was started again in 1949 and has gotten bigger and better every year since.

The events have increased so much over the years that now instead of having a three or four day festival; it lasts for over a week. Some events that are held are Opening, Closing Ceremony, Grand feature parade, Children’s Parade, ATV Race, County Fair (added 2000), Carnival, Coronation of Queen Silvia, Distinguished Guest Dinner, Queen’s Ball, Cabaret, Lumberjack Competition and many more. All together there are over 100 events included in the Mountain State Forest Festival.

The Royalty of the Mountain State Forest Festival includes, Queen Silvia, who is appointed by festival officials, she is a young lady from West Virginia (not the Elkins area) who shows great pride in our state and it’s agriculture assets. She must be at least eighteen years of age and someone honored by her appointment to reign over the Mountain State Forest Festival. The court also includes two Maids of Honor (always from Randolph County) who accompany Maid Silvia during her activities. The forty princesses who participate in the festival are selected from all over the state of West Virginia, their appointment are made by state dignitaries in their areas. The minor Court includes a crown bearer, four flower girls, two trainbearers, and the court jesters. They to, are appointed by festival officials, and are local children. The court also includes a Mascot named Woodly the Elf. This tradition was began in 1969 by Arnold Schultz who drew the first Woodly. A child from Randolph County in the third, fourth or fifth grade is chosen each year to portray Woodly The Elf. The winner is chosen thru a poster contest, the children make posters of Woodly enjoying the festival, the posters are judged and the artist with the winning poster is selected to be Woodly. Traditional the court has also included two Boy Scouts and two Girl Scouts the boys and girls participate in helping Queen Silvia plant a new tree to grow in her realm.

Over the years the Mountain State Forest Festival has grown so much that not only is there a Director General each year, but also a board of Assistant Directors numbering from 12 to 15. Also, the number of committee members and volunteers has increased considerably and continues to grow with each year.

The festival has always had a strong tie with the state’s agriculture and forestry industries; each year there is exhibits like a Christmas tree exhibits, wood products exhibits and woodcrafts. Also, during the coronation the new queen plants a seedling tree, which is then planted in the forests of West Virginia.

The Mountain State Forest Festival has become an annual event in the lives of the Elkins Community and the State of West Virginia.