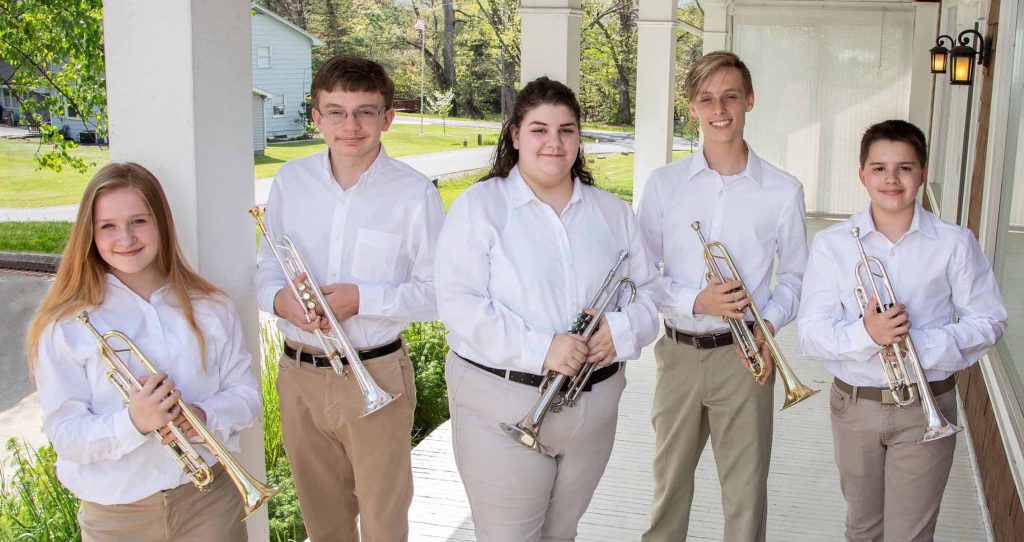 Austin McGraw Elliott is the son of the Brian and Tiffany Elliott. He is the grandson of Jim and Judy Curtis of Elkins and Dick and Karen McGraw, also of Elkins. He has a twin brother, Aaron.

Austin will be a freshman this fall at Elkins High School. He is an honor roll student and a member of the Elkins High School Fighting Tiger Band. While at Elkins Middle School, he was a member of the soccer team. He is active with the Buckhannon Community Theater, participates on a travel basketball team and travel soccer team with FC33, and plays piano. Austin attends The Way of Holiness Church and wants to attend Liberty University to study pre-law.
Benjamin “Ben” Scott Haddix is the son of Mark and Linda Haddix of Elkins. He is the grandson of Larry and Sue Spencer of Elkins and Bruce and the late Joan Haddix of Elkins. He has one brother, Adam, and three sisters, Amy, Emily, and Hannah.

In the fall, Ben will be a sophomore at Elkins High School where he is an honor roll student. He participates in the Elkins High School Fighting Tiger Band and plays soccer. He attends the Elkins Church of the Nazarene. In his free time, he enjoys swimming and spending time outdoors with his dog, Duke.

Natalia “Nattie” Darlene Stewart is the daughter of Michael and Kayla Stewart of Norton. She is the granddaughter of the late Michael Gear and Jenny Gear of Elkins and the late Lloyd Edmond and Kathy Edmond. She has one brother, Logan.

Nattie will be a freshman at Elkins High School this fall. She enjoys art, playing guitar and hunting.

Juanita Kathleen Teter is the daughter of Kenneth and Amanda Teter of Elkins. She is the granddaughter of Ralston Teter of Elkins and Larry and Brenda Coriell of Virginia Beach, Virginia. She has one brother, Kenneth Teter, Jr. and two sisters, Stephanie Bucher and Jessica Smart.

This is Juanita’s second year serving as a Royal Trumpeteer. In the fall, Juanita will be a sophomore at Elkins High School. She participates in the Elkins High School Fighting Tiger Band, is a Senior Girl Scout, and is a church member. In the future, she would like to study neurosurgery.

The Royal Trumpeteers will join Maid Silvia, Alia Danae Figueroa, who will be crowned the Queen of the 82nd Mountain State Forest Festival, during the Royal Coronation at 2 p.m. on October 5 at the Outdoor Amphitheatre of Davis and Elkins College. Attended by 40 princesses from around the state, two maids of honor and a minor court, she will receive her crown in an outdoor ceremony.