Jon Morgan will begin his sixth year as an assistant director for the 82nd Festival. He works for the USDA, Forest Service and is the Deputy District Ranger on the Cheat-Potomac Ranger District of the Monongahela National Forest. He and his wife, Jennifer, have one son Grant and one daughter Emma. Jennifer was crown bearer in the 1987 Forest Festival and a maid of honor in the 2000 Forest Festival. Morgan is a past president of the Elkins Kiwanis Club. He has worked on the Lumberjack Contest and Band Field Show Committees. This year, Morgan will be in charge of the City Park, Irish Road Bowling, Security and Communications, and the Festival Block Party. 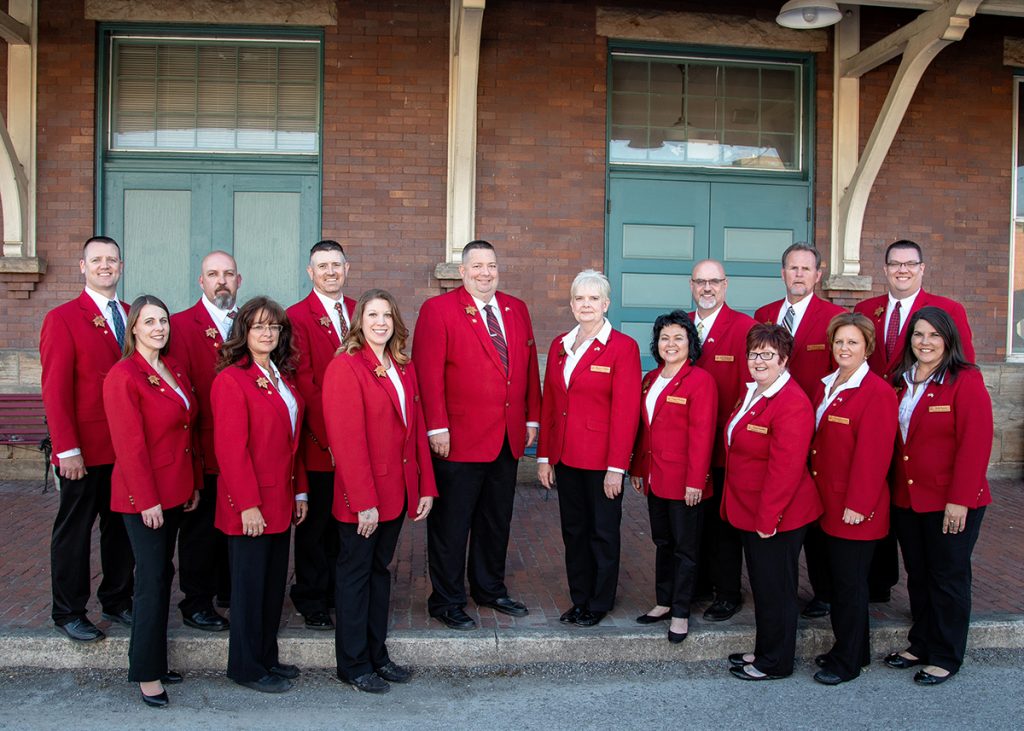 Tracy Gooden will begin her second year as an assistant director for the 82nd Festival. Gooden is employed as project manager for IBW Watson Health. She and her husband, Ron, have one daughter, Abigale, who served as a princess in the 80th Forest Festival in 2016. Gooden has served on numerous festival committees including, Queen’s Ball, Downtown Window Decorations, Distinguished Guest Dinner, the Country Music Show and Tailgate Party, as well as Opening and Closing Ceremonies. She and her family attend the Elkins Nazarene Church. This year, Gooden will be coordinating and planning for the Festival Craft Show, Country Music Show, Opening and Closing Ceremonies and the Fireman’s Parade Meal.

Amanda Jones will serve her first year as an assistant director for the 82nd Festival. Jones is a Family Nurse Practioner at St. Joseph’s Hospital/WVU Medicine. She and her husband, JW Jones have one daughter, Kourtney who was a flower girl in the 2015 Forest Festival. Jones serves as a board member for the Elkins Otters. Jones was 2017 Woodly the Elf Coordinator, assisted with Fireman’s Parade meals since 2002, Sponsor of the Forest Festival Bass Tournament and window decorations. This year, Jones will be in charge of the Forest Festival Bass Tournament, Downtown Window Decorations, Plaques and Photography Exhibit.

Jeri Pastine will serve her fourth year as an assistant director for the 82nd Festival. Jeri works for Davis Medical Center as the Project Coordinator. Her daughter Kelsi was a flower girl in the 2003 Forest Festival and a Maid of Honor in the 2014 Festival. Jeri is on the Elkins Little League Board of Directors and she will coordinate the Distinguished Guest Dinner and Queen’s Ball and the Golf Tournament.

Whitney Phillips will serve her first year as an assistant director. Prior to her appointment she was an assistant to the Queens Department for three years. However, she has been actively involved with the MSFF for many years. She has volunteered with the Distinguished Guest Dinner and Queen’s Ball Committees, the Band Field Show, Children’s Parade, Grand Feature Parade, and Talent Show. An active member of the Randolph County Chamber of Commerce, she received the 2013 Chamber Member of the Year Award. She also served as a flower girl in the 77th Mountain State Forest Festival in 2013. Phillips works for Carte Hall & Associates, A.C. as the Senior Staff Accountant and attends Elkins Alliance. She will be coordinating the Golf Tournament, Cross Country Races, Tennis Tournament and 10K/5K Race.

Robert “Robbie” Morris Jr. will serve as a Mountain State Forest Festival assistant director for his fourth year. Morris has two daughters, Elin and Tinley. Morris served as the train bearer in the 1993 Forest Festival and his father served as an assistant director in the early 1990s. Recently he housed princesses for past Festivals and served on the Personnel Committee of the Mountain State Forest Festival. He is the executive director of the Randolph County Development Authority and Wood Technology Center and was also named as a 2017 West Virginia Young Gun. Also active in the Elkins community, Morris is involved with the following: Elkins Main Street Board, Chamber of Commerce Board, United Way Board, Corridor H Authority Board, West Virginia Hardwood Alliance Zone Board, West Virginia Economic Development Council Board and the Southern Economic Development Council Board. For the 82nd Forest Festival, he will be overseeing the Forestry Wood Products Exhibit, the Grand Feature Parade, Horseshoe & Corn hole competitions and official vehicles.

Robin Miller will be working as the deputy director general throughout the 2018 Festival. She will be serving her sixth year with the Mountain State Forest Festival. She is employed by the Davis Memorial Hospital and married to Michael. She has served on the Children’s Parade Committee, assisted with the Queen’s Department Minor Court, worked on the Distinguished Guest and Queen’s Ball Committee along with various others. She is the Coordinator for the Randolph County Hooked on Fishing not on Drugs Committee for over the past 12 years. Miller will coordinate the Children’s Fest, Schedule of Events, Magic Show and the Highland Dance Competition.

Jeff Skidmore will return for his third year as an assistant director. He has been employed by the Randolph County Assessor’s Office as a data entry clerk for the past 22 years and has also been employed 38 years by Elkins Raceway as the competition placement director. He also volunteers for the Randolph County Hooked on Fishing not on Drugs. Skidmore has experience in serving on numerous Festival committees, including the Lumberjack Contest, the Country Music Show, the Gospel Show, Information Booth, ATV Races, the West Virginia Symphony and the Distinguished Guest Dinner and Queen’s Ball. He has two nieces, Jackie Skidmore-Teter and Samantha Skidmore-Ball, who have served as princesses in the Forest Festival. Jackie served in the 2002 and Samantha served in the 2006 Festival. Skidmore will coordinate Flags & Banners, ATV Race, Downtown Stage entertainment, The Jack Basil Memorial Band Field Show, Lights and Sound, and the ROTC.

Jodi Varner will serve her second year as an assistant director for the 82nd Mountain State Forest Festival. Varner is a resident of Beverly. She is a graduate of West Virginia Wesleyan College and is employed by the Randolph County Board of Education as a first-grade teacher at Beverly Elementary. Varner has served on various Minor Court committees, Princess Orientation, High School Cross Country Meet, the 10K/5K Race and Kids Fun Run, Grand Feature Parade and Chili Cook-off. She served as a princess herself in 1997 and her niece, Shay Teter, was crown bearer in 1997. She serves as president of Beverly Women’s Club and is a Randolph County 4-H and WVU Extension Service volunteer. This year Jodi will coordinate the Grand Feature Parade (secondary), Mountain State Forest Festival Program, and the “Taken it to the Street” Chili Cook-off.

Melanie Dempsey will be serving her second years as an assistant director. Dempsey is employed by Davis Health System as Vice President of Finance. She and her husband, Bill, have two children, Gabrielle and Caitlynn. Gabrielle served as the crown bearer in the 2016 Festival. Dempsey has worked with the Festival for several years, serving on numerous committees, including the Minor Court, Children’s Parade, Children’s Festival and Kids Day in the Park. She and he family are members of the Valley Bend Presbyterian Church. Dempsey serves as a board member for Youth Health Services and is active in her children’s school. During the 82nd Festival, Dempsey will be overseeing the Children’s Parade, Kid’s Day in the Park, Hospitality Tents and “Taken it to the Streets” Chili Cook-off.

Anthony “Tony” Bates will serve his fourth year as a Mountain State Forest Festival assistant director. He and his wife, Krista, have three daughters, Presley, Ella and Haley. Presley served as a flower girl in 2012 Forest Festival and as a Jester in the 2014 Festival. Bates is employed by Parrack Insurance Agency as an associate agent. He is actively involved with the W.V.S.S.A.C. Registered Basketball Officials and is the President of the North Central Officials Board. He is also a member of the Phillips Chapel. For the 82nd Mountain State Forest Festival he is tasked with the Strongest Man in the Forest Competition, Lumberjack Contest, Archery and Sanitation.

Todd Riggleman will serve as an assistant director for his tenth year. He is manager of distribution forestry with Mon Power, a First Energy Company. He and his wife Robin are parents of two sons, Garrett and Kyle. Kyle served as train bearer in the 2009 73rd Forest Festival. His sister, Kelly Gilbert, was a jester in the 1981 Mountain State Forest Festival. Riggleman attends Woodford Memorial United Methodist Church. He has served as a volunteer with Elkins Babe Ruth Baseball League for more than 12 years and volunteers for the Odd Fellows Group. He has experience working with the Lumberjack Competition, Flags & Banners, the Fireman’s Parade, Wood Products, Pet Show, Photography Exhibit and Grounds. He will once again be in charge of coordinating this year’s Flags & Banners installation, the Fireman’s Parade, Food Vendors and the Mini-Horse Show.

Gary Wildman will return for his eighth year as an assistant director. Wileman is director of classification with the Huttonsville Corrections Facility, where he has been employed for 25 years. He and his wife, Melissa are the parents of three daughters, Lynnlee, Mackenzie and Madison. For the 2012 Forest Festival, Lynnlee was a princess while Mackenzie was a flower girl and also served as a jester in the 81st Forest Festival. Wildman is a previous member of the board of directors for the Randolph County Convention and Visitors Bureau and has served as Chairman of the Ramp Festival. He will be responsible for Vendor Row, Information Booth, Primitive Campers and the Muzzle Loader Shoot.